The recent slayings of unarmed Black people by police are tragic results of the institutionalized racism that’s been baked into the US from the beginning. Racism is a systemic toxin in our body politic: one that must be eradicated.

Thousands of Black lives have ended too early due to abuses of power by racist police officers. These lives mattered. Black Lives Matter.

In an effort to catalyze both reflection and action, this episode will hopefully serve as a way to remember those we’ve lost and offer anti-racist resources and action ideas. 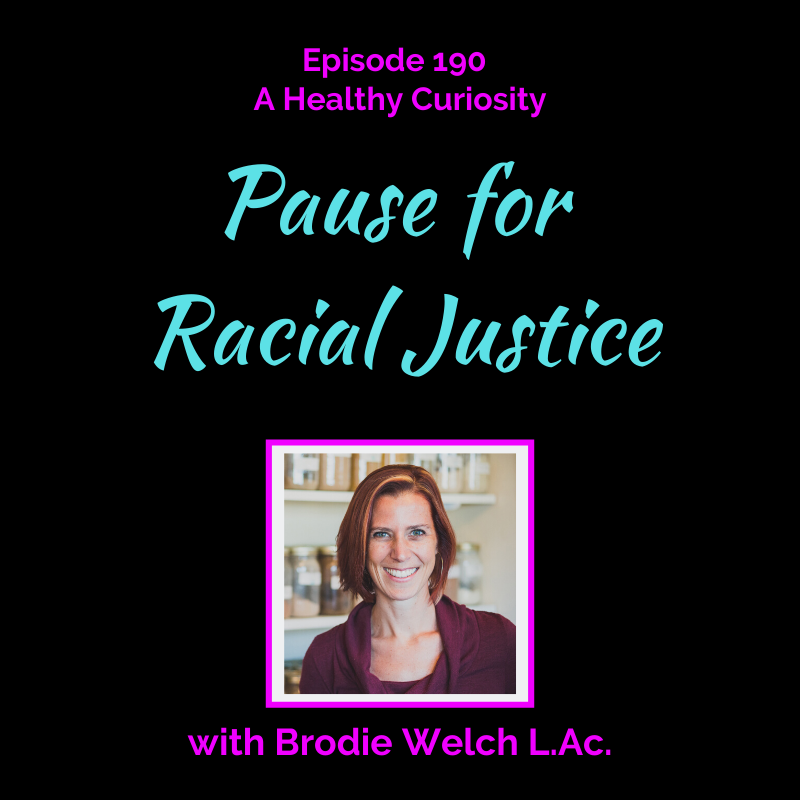 On Today’s Solo Episode of A Healthy Curiosity:

If we allow ourselves to be paralyzed by the magnitude of the problem, and the intense emotions it may arouse, we stay stuck in inaction. And we can expect more of the same.

As a white woman, I’m no expert in anti-racism. But I am committed to taking action in my own life.

I’m taking a yin/ yang approach to (imperfect) anti-racist allyship which looks like this:

This inner work in the yin dimension needs to balanced with the yang work of expressing it outward.

Showing up to do this work on an ongoing basis may seem overwhelming and exhausting.

We don’t have to do it all at once.

This is not a time to get hung up on how to do allyship “perfectly.” Instead, we can take Maya Angelou’s advice and “Do the best you can until you know better. Then when you know better, do better.

One step at a time.

Hello and thank you for tuning in this week to A Healthy Curiosity. It has been a tough week here in the United States, in addition to the global pandemic, which is disproportionately killing an effecting black and brown Americans. We’ve also seen profound injustice, murder, and abuse of power that results from institutionalized racism.

So as I think about how to use this podcast as a vehicle meant to catalyze healing and empowerment, it’s thinking today. It shouldn’t be business as usual. We should actually be talking about not tolerating something we shouldn’t tolerate, right? Just as we aim to eradicate toxins and pathogens from our individual cells and from our individual ecosystems, we also need to eradicate the toxin that is racism that is present in our society.

For my listeners of color, I’m not going to try and whitesplain racism to you. You can feel free to skip ahead a few minutes while I talk to my white listeners in the audience. I know that I have a lot to learn and I hope that my saying something even imperfectly is better than staying silent because as white people, it is incumbent upon us to use our privilege to change a system that was set up to benefit white people, and that is still causing harm to people of color each and every day.

It starts with the yin work of looking within and looking at own internal implicit bias, our own unconscious racism and trying to bring that out of the shadows so that we can see it, and eradicate it.

It also is about listening to people of color and recognizing that we have a very different life experience that’s informed because of our race and gender. And how people react to us because of it.

There’s also the yang dimension, the dimension of action, the dimension of the outer world. Anti-racist actions we can take include having conversations with other white people about race and racism. It can be about picking up the phone or writing a letter or an email to advocate for change. It can be donating money to anti-racist organizations led by people of color. It can mean amplifying the voices of people of color on social media in any platform that we might have access to. It can be showing up at a protest and putting our bodies on the line.

It may look like voting, registering others to vote, and encouraging voters to turn out because our future is on the line.

It may seem overwhelming. We can get around that overwhelm by asking ourselves what concrete thing can I do today to advance the cause of justice and equality and maybe how can I go beyond what might be comfortable?

Because that’s where we grow. Where we grow in personal development is by taking risks, by acting in non-habituated ways. Perhaps it’s even forming a habit of activism or of action, just like you might work on exercise or meditation with small steps over time that just become the new normal, that if he comes more comfortable to make a phone call, it becomes more comfortable to engage in these difficult conversations.

Though, if it were my son or my husband or my brother who I had to worry about being killed simply by going through the course of his daily life, I would be angry. I would be outraged and that would likely supersede any personal discomfort I felt in taking action.

Being killed by a police officer is now a leading cause of death for young men in the United States with black men being two and a half times more likely to be victims than white men. So today on the podcast, I am going to read a list of names and circumstances of Black people slain by police or others who have been victims of hate crimes.

Of course, this is a very incomplete list (my source for which is NPR’s Code Switch podcast page)

Eric Garner had just broken up a fight.

Ezell Ford was walking in his neighborhood.

Michelle Cusseaux was changing the lock on her home’s door.

Tanisha Anderson was having a mental health episode and her brother had called 911,

Tamir Rice was playing at a park.

Natasha McKenna was having a schizophrenia episode.

Walter Scott was going to an auto parts store.

Betty Jones answered the door to let Chicago police in to help her upstairs neighbor who had called 911.

Philando Castile was driving home from dinner with his girlfriend.

Botham Jean was eating ice cream in his living room in Dallas.

Atatiana Jefferson was babysitting her nephew in Fort worth, Texas.

Eric Reason was pulling into a parking spot at a local chicken and fish shop.

Dominique Clayton was sleeping in her bed, as was Breanna Taylor.

And George Floyd was at the grocery store.

Yeah. The lives of these humans of color ended too early, and there’s only going to be more names added to this list.  Especially if more of us don’t put our qi, our life force into aligning with our values of equality and justice and love for one another.

Like nearly any monumental task. It doesn’t happen all at once. But persistent effort over time means that we will eventually see change. I’m including in the show notes for this week, some anti-racist resources, which I’d invite you to check out over at brodiewelch.com/podcast.

Thanks so much for listening today and I’ll be back at you with the normal health and personal evolution stuff next week. Actually, it’s going to be an amazing episode on NeuroDharma with Rick Hanson, and I hope you’ll tune in then and I hope for the love of God it’s an easier week for all of us here in the United States and throughout the world.

Love to you all.

Episode 189: The Evidence for Acupuncture

Because these cookies are strictly necessary to deliver the website, refusing them will have impact how our site functions. You always can block or delete cookies by changing your browser settings and force blocking all cookies on this website. But this will always prompt you to accept/refuse cookies when revisiting our site.